Innovation does not come easy, a world-renowned CEO told an attentive audience in November. Key ingredients in achieving it are “aspiration” and “patience,” AmorePacific Group CEO Kyong-Bae Suh said, explaining that aspiration is needed to achieve innovation and patience is required to endure until customers recognize and embrace it. 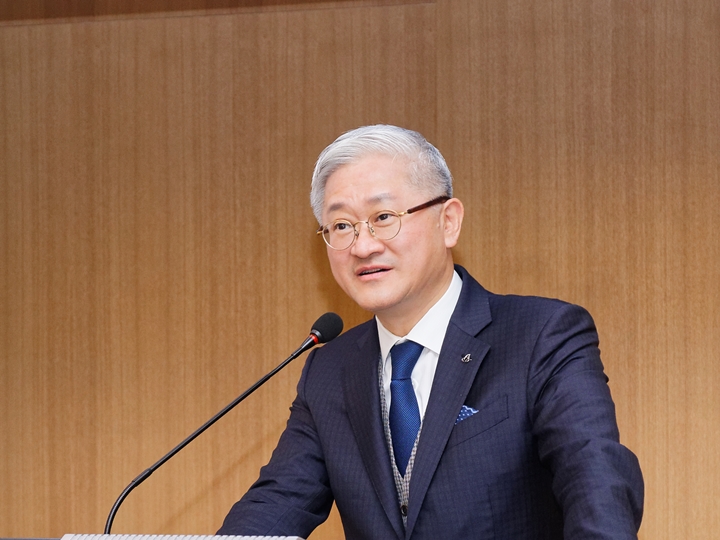 Suh (entering class of 1981, Business), recently ranked 20th  — and second in Asia — on a list of the world’s best CEOs, was delivering the first in a planned series of YVIP (Yonsei Venture, Innovation, and Start-up Program) Global CEO Talks. His favorite Chinese idiom, “chun oi yu chun” (天外有天), he said, means “there is another sky outside the sky. So, the sky that you reach can be different based on your faith.”

Suh concluded his speech by encouraging students to challenge themselves, start new businesses, and eventually emerge as young, rich entrepreneurs. Answering a student’s question about his secret of success, Suh emphasized the importance of habit, adding, develop a habit of reading and before you go to bed take ive minutes to write down how your day was.”

Asked about the future of AmorePacific in regards to political conflicts with China, he said improved competitiveness and singularity will ease the challenge. Lastly, he advised students who would like to start a business to “do what you like most and be passionate and patient until it flourishes.”

Considered in Korea as an icon of what an innovative CEO should be, Suh was the only Korean on the list of “Best-Performing CEOs in the World 2017” as co-ranked by the Harvard Business Review and INSEAD. The company he leads, AmorePacific, was ranked 16th by Forbes on the magazine’s list of the world's most innovative companies.