Yonsei Business Research Institute of YSB has hosted 10 lunch forums since May on the topic of the  “Fourth Industrial Revolution,” a series desined to promote interdisciplinary research and collaboration between industry and universities on the essence of this revolution, its progress, and future development and to propose to Korean firms a management paradigm suitable for this new trend.

The forums brought together researchers and professors from diverse backgrounds, including business, law, philosophy, medicine, theology, engineering, and media to share their thoughts and engage in discussion.

At the first forum, YSB professor Il Im (Information Systems) spoke on “Business Research Directions and the Fourth Industrial Revolution,” and Jung-Soo Kang (CEO of Mediati) lectured on “Optimism and Digitizing the Greenery” at the second forum.

» Hyuk-Seung Yang, Director of the Yonsei Business Research Institute, “Changes in the Employment Ecosystem in the Fourth Industrial Revolution and a Corresponding Strategy” (September 14) 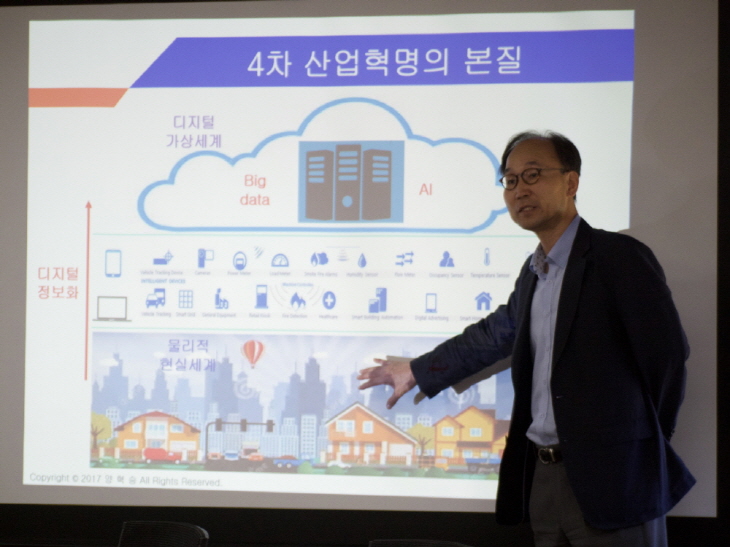 Professor Hyuk-Seung Yang pointed out that there is no clear agreement on a definition of the Fourth Industrial Revolution and what differentiates it from the Third Industrial Revolution that was based on digital technology. He explained that the accumulation of Big Data in the digital world and the development of artificial intelligence as an efficient analytical tool to better predict the future are proof of the change underway.

Using a study by Frey & Osborne (2013) at Oxford University and the Organization for Economic Co-operation and Development (2016), he explained both the optimistic and pessimistic views of the impact of such change on employment. He emphasized the possibility of deepening income inequality because of technological change. Based on numerous data from Korea and the United States, Professor Yang explained the “decoupling phenomenon” in which labor productivity increases while income stagnates and noted a trend in which income inequality worsens as the top 0.01% increases its share of income through high levels of education and high levels of income.